Posted at 00:54h in Fallacies by Jim Cliff
0 Likes
Share

The Failing Occam’s Razor Fallacy is committed when someone ignores an obvious or simple explanation for something and chooses a far-fetched hypothesis instead.

We started out by talking about this tweet from Trump:

and then we discussed this clip where Lou Dobbs almost figured it out, but not quite:

Mark is having to take a few weeks off from the podcast due to work, so Jim talked about this clip in which Therese Coffey claims the huge COVID case count in the UK is due to anything other than the government doing stuff wrong:

And then we listened to Baron McColl of Dulwich lying about the levels of obesity and population density in the UK to tell essentially the same story.

We talked about this clip from The Simpsons:

We followed that up with this clip from Brothers and Sisters:

Other places you can see us this week

Jim was a guest on the Sitcom Archive Deep Dive Overdrive podcast last week, in which he talked about various logical fallacies committed by Margo Leadbetter from classic 70’s British sitcom ‘The Good Life’ (known as Good Neighbors in the US). It’s basically an extended Fallacy in the Wild section, so check it out! 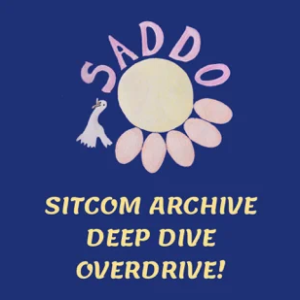 Meanwhile, Jim and Mark have teamed up with Mark’s friend Ian to play a fun game called No More Jockeys on YouTube. Game 1 is up now, and subsequent games will go up on our YouTube channel on the first of every month. We’re just doing it for fun really, but if you want to watch, here it is:

My guest Marsh got it wrong again this week, and is currently on 0%

Marsh is not a logical fallacy

Marsh, AKA Michael Marshall from The Merseyside Skeptics, Be Reasonable, Skeptics With A K, The Good Thinking Society, QED, Skeptics in the Pub Online, and The Skeptic Magazine (!) joined me for a chat about how he got started in skepticism, how to help friends and family in danger of believing things like Q, and the plans for the next QED conference, among other things. Make sure you check out all his stuff – which is universally excellent.

That’s all for this week, welcome to our newest Patron Brian, and thanks for listening!