Posted at 00:29h in Fallacies by Jim Cliff
0 Likes
Share

Lying with Statistics can involve using highly specific numbers to make it seem like you know what you’re talking about, using a true statistic out of context to bolster a particular point of view, or simply using made up statistics and hoping your opponent doesn’t check them.

We started out with this tweet from the Donald:

Some of those numbers apparently came from this graphic on the One America News Network: 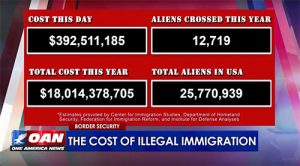 Then we talked about this:

The real truth behind that number, and the amazing fact check that the Washington Post did on the Amnesty International statistic we mentioned, can be found here

In Mark’s British Politics Corner, we talked about this exchange in Prime Minister’s Questions, from January 2018:

In the Fallacy in the Wild, we talked about these clips from Yes, Minister and The Simpsons:

1. I’ve listened to these intelligence people go on and on, and, quite frankly, it’s a waste of time. I can do my job without any intelligence whatsoever.

2. My intelligence people, if they said in fact that Iran is a wonderful kindergarten, I disagree with them 100 percent. It is a vicious country that kills many people.

3. I heard it was 17 agencies. I said, “Boy, that’s a lot. Do we even have that many intelligence agencies? Let’s check it.” And we did some very heavy research. It turned out to be three or four.

We talked about Trump’s State of the Union, mostly focusing on his comments about El Paso, Ralph Northam executing babies, and North Korea.

And finally, here are the stories we really didn’t have time to talk about…

Thanks to our newest Patron, Richard Hopkins.  See you all next time!