Posted at 22:25h in Fallacies by Jim Cliff
0 Likes
Share

The Appeal to Flattery Fallacy is committed when someone uses flattery in the place of an argument when convincing someone to accept their point of view.

We started out with this Trump tweet about A$AP Rocky:

Just spoke to @KanyeWest about his friend A$AP Rocky’s incarceration. I will be calling the very talented Prime Minister of Sweden to see what we can do about helping A$AP Rocky. So many people would like to see this quickly resolved!

Then we looked at this clip of Trump telling his supporters how smart they are:

And then we talked about Boris’s own father claiming that uncooperative crusties’ (Boris’s term for extinction rebellion protesters) is actually a compliment:

In the Fallacy in the Wild, we looked at this old L’Oreal ad:

Then we discussed this clip from South Park:

Finally, we talked about H.G. Wells’ book “Little Wars: a game for boys from twelve years of age to one hundred and fifty and for that more intelligent sort of girl who likes boys’ games and books”

This week’s sponsor was Escape the Crate, a subscription box where you can do an escape room in your own home!  Click here to sign up!

Then Jim talked to Simon Chadwick, author of For the People: A Citizen’s Manifesto for Shaping Our Nation’s Future,  You can find out more about Simon on his website and get his book from Amazon: 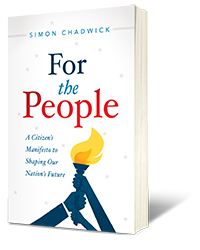 And finally, here are the stories we really didn’t have time to talk about: