Posted at 00:12h in Fallacies by Jim Cliff
0 Likes
Share

The Equivocation fallacy relies on using a word with more than one meaning to set up a misleading argument. Often the word will be used in one sense in the premise, and in the other sense in the conclusion, implying that because the word is the same, the meanings are the same.

We started out with White House Chief of Staff Mick Mulvaney’s amazing on-screen confession in which he used ‘politics’ to mean multiple different things:

Here’s what Michael McKinley had actually said: “The timing of my resignation was the result of two overriding concerns: the failure, in my view, of the State Department to offer support to Foreign Service employees caught up in the Impeachment Inquiry on Ukraine; and, second, by what appears to be the utilization of our ambassadors overseas to advance domestic political objectives… I was disturbed by the implication that foreign governments were being approached to procure negative information on political opponents,”

Then we talked about this retweet, which he later deleted (but nothing ever goes away on the internet): 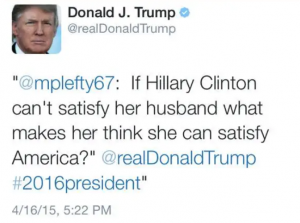 And finally we discussed this tweet about fake news:

Twitter is getting rid of fake accounts at a record pace. Will that include the Failing New York Times and propaganda machine for Amazon, the Washington Post, who constantly quote anonymous sources that, in my opinion, don’t exist – They will both be out of business in 7 years!

– which Mark has helpfully transcribed and annotated!:

Lisa Nandy: You say that Labour MPs are sitting here are trying to use language misleading language in order to mislead the public

Mike Graham: You are

LN You keep talking about a deal, we haven’t negotiated a deal and this is part of what is obscuring this for the public you have to be clear about what has happened here

MG So you’re gonna tell me…

LN You’ve got to tell the truth

MG Well I am telling the truth because that’s what I do. What I don’t do is obfuscate the truth. Which is what you people do

LN Because if we have an election right now we give Boris Johnson the power to set the date and if he sets the date after the 31st of October we leave the EU with no deal and no arrangements at all.

MG Well you say we haven’t got a deal now

LN We’ve got a deal

MG You just told me we haven’t got a deal, you can’t even have a deal a minute ago and now not have a deal

LN The truth is we haven’t left the EU yet

MG right so do we have a deal

LN we haven’t negotiated a deal

MG You just said we had a deal

MG and that’s what they’d say to me

In the Fallacy in the Wild, we talked about this clip from the TV movie version of Alice In Wonderland, with Carol Channing:

Then we discussed this Monty Python sketch:

We also talked about this Abbott and Costello bit about moving a car:

We then talked about Trump’s tendency to brand anyone who doesn’t show him obsequious fealty a ‘Never Trumper‘.

And finally, here are the stories we really didn’t have time to talk about: