Posted at 03:35h in Fallacies by Jim Cliff
0 Likes
Share

The Ambiguity Fallacy is committed when someone is deliberately vague or ambiguous to make their point or avoid answering a question.

We started out with this clip of Trump vaguely promising that COVID will just go away at some point:

Then we talked about this tweet from Don Jr which uses ‘turnout’ in an ambiguous way:

And finally, we looked at this Charlie Kirk tweet in which he pretends he doesn’t understand the difference between reducing danger and eliminating it:

If masks work, why are states forcing some businesses to stay closed?

If masks don’t work, why are states forcing people to wear them?

Mark is having to take a few weeks off from the podcast due to work, so Jim talked about this clip of Boris Johnson at the G7 being very vague about whether he was planning on paying the EU the £39 billion the UK promised them:

We talked about this clip of Lionel Hutz using an ambiguously punctuated ad to get people into his law office:

We followed that up with this clip from No Country For Old Men, where an old man is vague about what time his gas station closes because Javier Bardem is making him uncomfortable:

Our guest host Rachel got it right this week, so she’s now technically in the lead (tied with Caplin and Massiah) with 100%.

We took a moment to tell you about a podcast we recommend called The Politics Guys, which is an intelligent bipartisan look at the week’s political news.  Check it out! 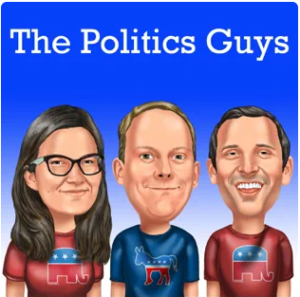 The election was not a logical fallacy

We talked about an election that’s been in the news a bit this week including the simply amazing moment that Trump’s lawyer and his team held a press conference outside Four Seasons Total Landscaping because someone fucked up and called them instead of the actual Four Seasons in Philadelphia.  It inspired us to make this t-shirt, which you can now buy in our Teepublic store! 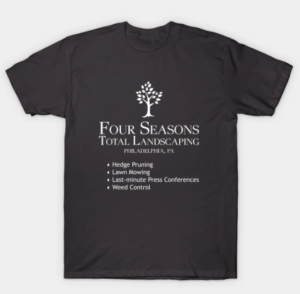